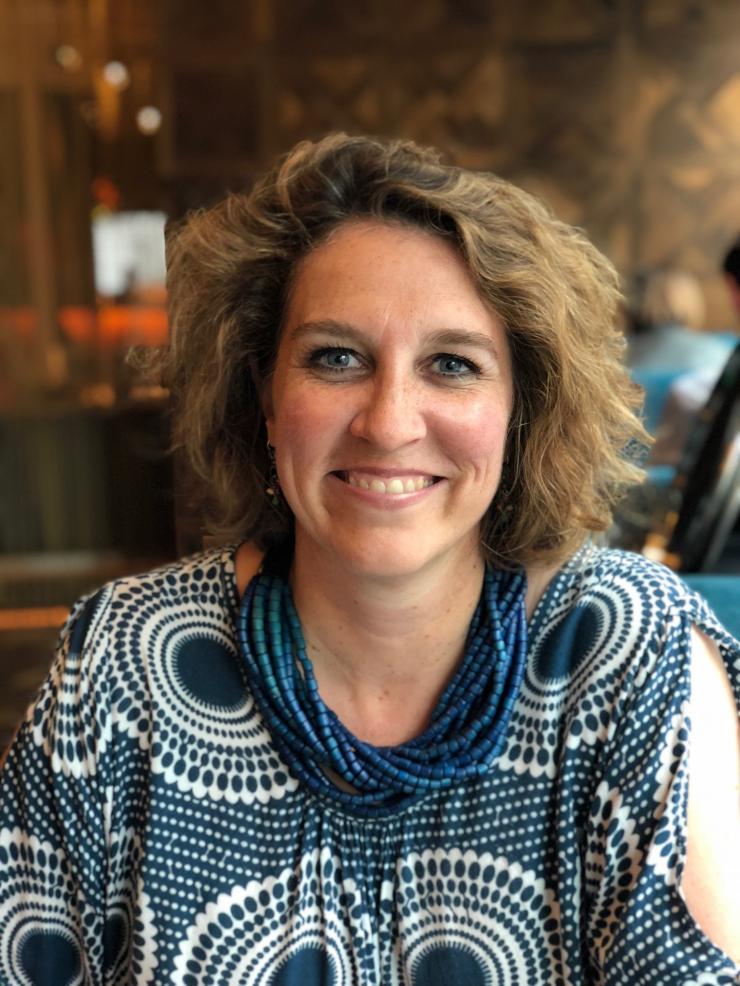 A long-standing member of the Tourism Australia team, Eva Seller was appointed Regional General Manager, Continental Europe in 2012. Prior to this she was Marketing Manager. Eva is a proud pseudo-Aussie and passionate ambassador for Australia’s tourism industry.

HOW IS LIFE IN Europe AT THE MOMENT?

Life in Europe continues to be an emotional rollercoaster. Most European countries are starting to come out of a particularly hard winter. Hard not only because of a particularly harsh cold spell and a lot of snow, but also from spending most of the late autumn and winter in various stages of lockdown which has meant that many industries have been unable to conduct their business in a profitable way for approximately 12 months. This means that in our three core markets, Germany, France and Italy, restaurants have either been closed for months or operating under severely reduced opening times. Non-essential shops remain either closed or have a ‘click and collect’ policy. Cultural, entertainment and sports facilities have also been unable to welcome visitors for quite some time. The lockdown has particularly affected the travel and hospitality industry as most governments strongly discourage travel. Whilst most European borders remain open, there are varying rules around quarantine and border entry requirements.

Many European countries are currently on the verge of a third COVID-19 wave and resulting in consumers and businesses being tired of an ever-changing set of rules, of contradictions within the rules and there is a distinct desire for a clear perspective out of the crisis. That said, vaccination programs have well and truly started across Germany, France and Italy and are expected to gain momentum after Easter when more vaccine doses become available. Currently in each of these three countries, approximately 12 per cent of the population has been vaccinated and it is expected that between late European summer and early autumn, each person wanting to be vaccinated, can be. There is ongoing debate on what entry rules will required on a valid vaccination document and this discussion is being followed across all walks of life and all countries.

As in most countries, savings are at an all-time high and people are eager to spend with travel being one of the categories that is much sought after. As soon as restrictions lift on any destination, for example Mallorca in Spain recently reopened, consumers start to book these destinations immediately. The same applies for long haul destinations easing entry requirements or opening borders without quarantine requirements. People have spent a lot of time at home or in the immediate vicinity of their homes, they are keen and willing to start travelling again.

Unemployment figures remain steady (between 4.6 per cent in Germany and roughly 9 per cent in Italy) and have not shown any significant changes for the past 12 months. Government support schemes continue to apply to businesses in most cases until the end of 2021. So, the overall economic conditions remain favourable to travel for our target audiences and the desire to have a change of scenery is at an all-time high. Consumers are prepared to commit to long lead times as long as booking conditions are flexible.

WHAT IS THE LATEST NEWS FROM OUR KEY STAKEHOLDERS IN MARKET?

Our key stakeholders continue to be very engaged with Australia and luckily, the vast majority of our stakeholders continue to operate, even with reduced working hours or reduced teams. Some trade partners have picked up additional destinations within Europe which they are selling and some have changed their operating models, however, the commitment to Australia and the South Pacific remains strong and there are customers willing to book as soon as there is a reliable border opening date on the horizon.

We are seeing our stakeholders engage more intensively with their customers either via destination webinars, staff are taking famil trips to African or Central American countries and reporting back to their customer base and a range of virtual customer evenings being organised. The team recently conducted virtual workshops for key distribution partners with Maruku Arts with at least one of these partners now organising the activity for their clients. Our stakeholder partner webinars to their distribution networks focus on new itineraries including off-the-beaten track tours, road trips with a difference or provide more education on choiceful travel within Australia. Some of our partners are also teaming up with media partners to run Web TV programs on Australia. The particularly optimistic trade partners are starting sales initiatives for trips to Australia from 2022 onwards and the reported conversion figures give every reason to be optimistic. Clients are seeking something to look forward to, are looking to make bucket list trips a reality and are happy to commit money up-front if booking conditions are very flexible. Many of our key stakeholders are in the process of finalising their brochures with the large majority working on digital brochures rather than printed copies.

Tourism Australia events such as the UK/Europe Australia Marketplace Online and the Australian Tourism Exchange 2021 (ATE21) have proven a popular medium for partners to receive the latest updates on Australia and to stay in touch. There are currently 77 buyers registered for ATE21 from Continental Europe across Germany, Austria, Switzerland, France, Italy and Spain. This is an amazing result and shows the great support for Australia and the connections our buyers feel with the Australian industry. When our European stakeholders have more clarity on the border opening date, they are ready to sell.

WHAT ARE TOURISM AUSTRALIA’S KEY AREAS OF FOCUS IN THESE CHALLENGING TIMES?

We have focused on both trade engagement and trade training activities, and keeping our customer target group inspired through public relations, content, and other digital activities. Whilst travelling is currently not possible to Australia, dreaming of the destination and fine-tuning the perfect itinerary is.

The team at Tourism Australia has continuously engaged with our trade partners through various industry update sessions and some virtual activities as well as continuous one-on-one conversations. Looking at the combined range of activities, we updated approximately 280 industry representatives over the course of seven industry updates in our region, trained just under 3400 Aussie Specialist agents across a series of webinars held either in conjunction with our State and Territory Tourism Organisation partners or through new formats developed during the lockdown time.

The marketing and PR teams have been busy keeping the ‘Destination Australia’ dream alive. We engaged Continental European media through media relations and a series of bespoke media engagement activities such as an Aboriginal dot painting experience with Maruku Arts and an upcoming webinar on conscious travel. Germany has run a series of bespoke German content initiatives with renowned publishing houses Gruner & Jahr as well as Merian resulting in stand-alone Australia supplements and an up-coming digital content special. Alongside this, we have leveraged the Lonely Planet Tourism Australia partnership with a particular focus on Italy and are working in partnership with the Australian Embassy in Paris during their ‘Australia Now’ initiative which is planned for July this year and includes content and destination branding around one of Paris’ famous upmarket department stores . These activities are being complemented by localised features of the 8D video series and content other topics of interest including wildlife on Australia.com. Customer engagement figures show continued interest in Australia with estimated advertising reach of AUD7.994 million and just under 670,000 unique visitors to Australia.com in addition to 7.3 million completed video views.

As soon as border opening dates become visible, we will shift our focus to a more conversion-oriented approach.

IN THESE TRYING TIMES, WE COULD ALL DO WITH SOME GOOD NEWS. WHAT HAS PUT A SMILE ON YOUR FACE RECENTLY?

Our recent dot painting workshops with Maruku Arts have made me smile and brought tears of joy to my eyes. The sessions were conducted live from the Red Centre, with Uluru as a backdrop and the Maruku artists seated in the red sand and painting while we spoke. The sight of the red sand, the direct interaction with the four artists across the workshops, gave me an immediate emotional connection. I could almost feel the heat and hear the sounds of Australia. It brought an immense sense of longing, but equally the great pleasure of seeing that my beloved Australia was still there, that we are able to interact with those important to us and almost feel as if we were there. Our trade and media partners echoed that sentiment which was beautiful to experience. My artistic talents leave a lot of room for improvement, but the experience certainly made my day on each of the four days we ran the workshops.

The other huge smile went on my face when back in November, we were able to unveil the latest edition of the Banner on the outside wall of the Australian Embassy in Paris. A huge, warm Aussie welcome to our international visitors ‘With Love from Aus’. 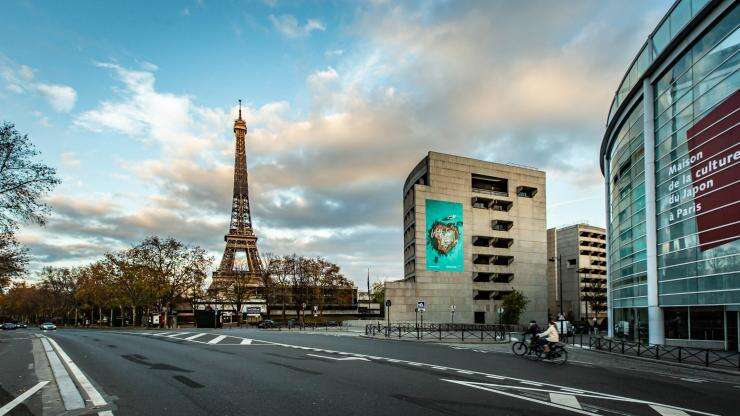 Please feel free to contact me directly to share your thoughts and ideas. I am keen to stay in touch, Eva.

FINALLY, WHAT ADVICE DO YOU HAVE FOR AUSTRALIAN INDUSTRY WANTING TO STAY ENGAGED WITH THE German, French and Italian MARKET?

Firstly, keep in touch with our key distribution partners and the regional Tourism Australia teams, keep us up-to-date on any developments with your product or business, and try to make these sessions interactive, ideally bringing your product or region to our living rooms which are currently our offices. We miss the Aussie beaches, wildlife, the outback and Aussie lifestyle. Share your story with us and we will see how it can be incorporated into our various news channels across either the trade distribution or consumer facing channels including PR. Areas of interest are road trips, conscious travel including cultural sustainability, wildlife and any other truly Australian character, product or experience setting us apart from other destinations.

On a more practical note, get your rates ready for ATE21 and we look forward planning the future product for 2022! Our partners are looking for flexible booking conditions and, if available, for some deals with a longer lead time, i.e. ready at the time of border opening. It would also be good to familiarise yourselves with European Terms and Conditions that our distribution partners have to grant their customers, including during a pandemic to allow for better mutual understanding and solution finding.